In case you were wondering what Lady Gaga was planning for Stonewall Day Celebration, as one of the voices representing the LGBTQ+ community, Gaga was part of the Lineup that took place during the New York Street Pride Parade. 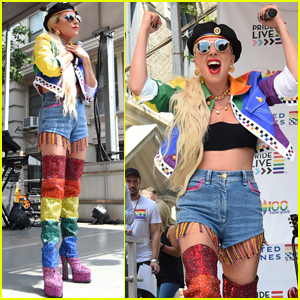 Joined by fellow icon Donatella Versace, Gaga saluted the crowd for continuing the fight for equality and honored Stonewall’s pioneers Marsha P. Johnson and Sylvia Rivera for their fearlessness. “This community has fought and continued to fight a war of acceptance, a war of tolerance, and the most relentless bravery,” she said. “You are the definition of courage.”

On any other occasion, Gaga’s clothes would have been the main event, but her speech, which called for an end to violence against the trans community, took the focus. “Be bold and embrace the Stonewall legacy,” she told the crowd, reminding them to head to the polls next election. “Love each other raise your voice and my gosh, don’t forget to vote!”